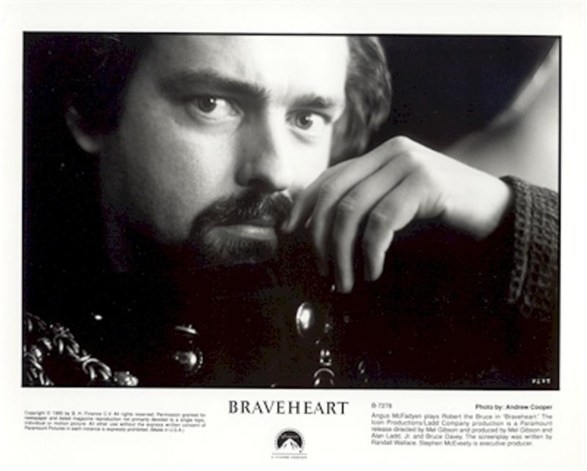 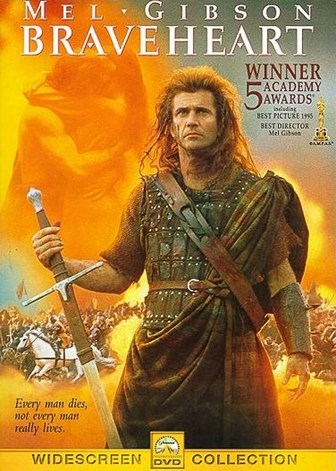 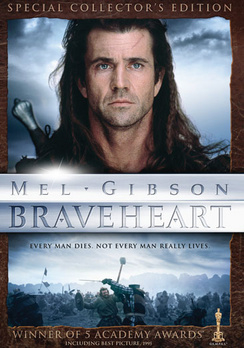 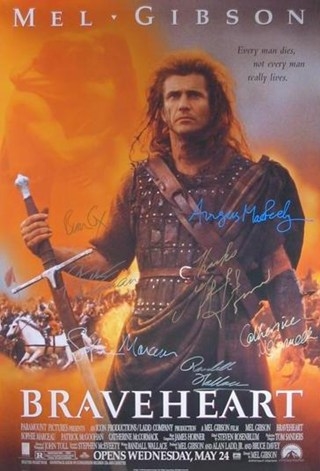 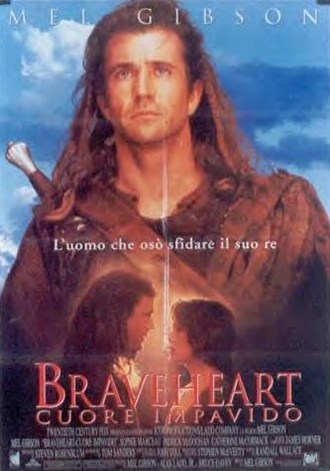 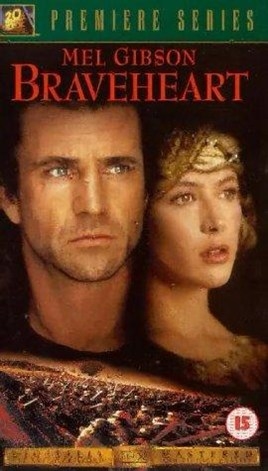 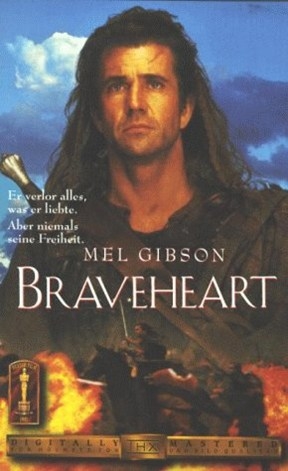 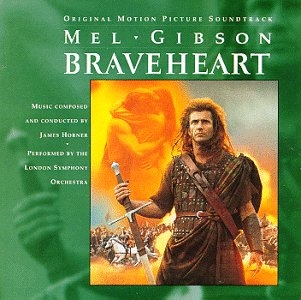 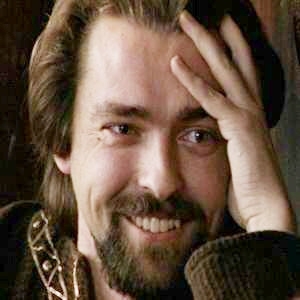 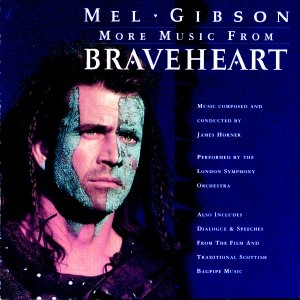 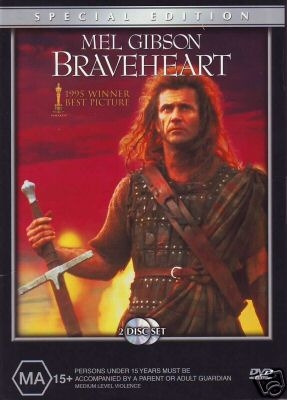 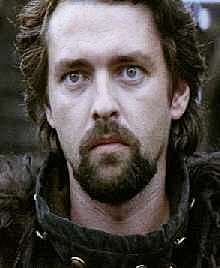 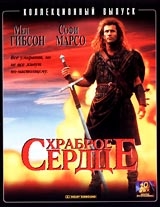 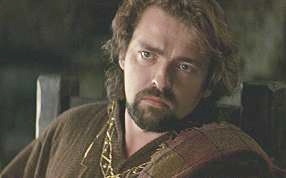 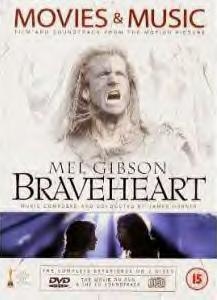 Angus Macfadyen does battle with his dark side in ‘Warriors Of Virtue’.

HOLLYWOOD – Angus Macfadyen is quietly grappling with the good and evil within.

As Komodo, a sinister yet charming warlord in the action/fantasy flick ‘Warriors Of Virtue’, opening Friday, the twenty-something actor wore pale makeup, an Elvira-dark wig and devilish robes, then took an introspective look in the mirror.

“Suddenly, there’s this strange creature looking back at me, saying, ‘Hello! I’m your shadow,'” cackles the actor, “‘and you haven’t been playing with me lately! Come out to PLAY!'”

Fortunately, battling one’s inner dark side is just the kind of moral struggle Macfadyen specializes in – both professionally and personally.

Making his feature debut in Mel Gibson’s Oscar-winning ‘Braveheart’, the fetching Macfadyen excelled as the conflicted Scottish nobleman who betrays, then befriends, good guy Gibson in his revolt against the British.

More recently in the can is ‘Snide And Prejudice’, in which he plays a mentally ill man who thinks he’s Adolph Hitler.

“It’s a bit like being a drunk,” he says, of his “addiction” to playing characters on the edge.

“Once you’ve been there, you don’t want to go back.”

On the surface, ‘Warriors’ is about a boy (Mario Yedidia) transported to a mystical land of animal-human inhabitants fighting (with martial arts and a dose of Taoism) for survival.

But it really symbolizes “the fight between light and (darkness),” says the philosophical actor.

The good guys – five kangaroo-looking warriors each endowed with a virtue in classic Chinese tradition (benevolence, righteousness, order, wisdom and loyalty) – try to defend their people without actually killing the bad guys.

In the end, young audience members are to learn, “the only demons in this world are in your own heart,” says Macfadyen. “That’s where all the battles must be fought.”

Macfadyen’s own spiritual quest began in Scotland, where, “I was an angry kid who didn’t understand myself or the world,” he says. “Then I began to acquire bits of wisdom here and there.”

Growing up in a family that moved around (dad worked for the World Health Organization), he learned life lessons in locales such as Africa, France, the Philippines and Singapore.

Ideal training for the nomadic lifestyle of an actor, he agrees, since “now, I can’t settle down for very long in one place.”

But still scant preparation for his two-month ‘Warriors’ shoot in Beijing.

Even the man-made set of turquoise waterfalls and breezy, surreal forestry – a lavish Garden of Eden – was hell to work with.

“The whirlwind of leaves and dust got in our mouths and noses,” he grimaces, “it was just disgusting. They’d turn on the fans, and I’d think, ‘No more! Let me go home!'” (Some exteriors were shot in North Vancouver.)

Adding to the stress was the sub-zero temperatures of the soundstage, fixed for those actors wearing 40 pounds of unyielding, hot, plastic ‘kangaroo’ costumes.

On days off, Macfadyen took refuge in a Shaolin monastery, observing monks in meditation.

“For them, it’s their direct expression to the universe,” he says, in awe.

“They practise this eight hours a day and they’re not doing it to sell something to somebody. It was incredible to see because it was so pure.”

Fitting research for ‘Warriors’, he notes, since it’s a film “with a soul.”

The love-brainchild of the four Law brothers, all Colorado medics born in Hong Kong who shared a notion to make “a family film with a positive message,” the siblings put up $36 million for their first venture as movie producers.

“At first, everybody was stepping on everybody’s feet just like dancers learning to dance with each other,” says Chris Law, a plastic surgeon. “But we turned from a clumsy dance team to a tag team.”

Along with acclaimed Hong Kong director Ronny Yu (‘The Bride With White Hair’), the team agreed on a common goal for their youthful audience: more morale, less violence.

“The cinema is a medium with great impact,” says Yu. “I feel responsible for the message I send out.”

Using 27 masks, 200 pairs of hands, and 120 pairs of feet, special effects guy Tony Gardner “walked a fine line between what is scary and what is accessible,” he says, while constructing the motorized faces and bodies of the kangaroo warriors.

“We were constantly softening their features,” he says, conscious that they should appear non-threatening to kids.

Added artsy stuff came from Macfadyen, an English/French graduate from the University of Edinburgh, who wrote some poetry (“Life is but a dream … flowing to another dream …) into his prose.

“I wanted to make (Komodo) a poet and a philosopher,” he explains, “exciting and enticing enough to mesmerize this young boy.”

With starring roles in four upcoming Hollywood movies, plus current heartthrob status in Britain (due to several BBC productions that showcased the actor’s saucer-blue eyes), Macfadyen’s own head should be turning.

But while his career is moving at full speed, his personal life retains a Zen-like stillness.

Now transplanted to L.A., though, the peace never lasts for long.

He’s working on a script which he’ll direct that asks the questions: “What is success and failure?” and, “In order to be an artist, must you be tortured?”

“It’s about an insane Frenchman who tries to rebuild the Versailles palace in the middle of the desert to make it into a gambling casino,” he laughs, adding, “he’s mad.”

The Making of ‘Robert The Bruce’ Video posted on YouTube.

Fan club: You were born in Scotland and raised in France, what are your impressions of growing up in France?

Fan club: What age in your life did you want to become an actor?

Angus: “As I child I worked as a clown in the circus. Laughter was my substance abuse.”

Fan club: Was there a certain actor that inspired you?

Fan club: You have been in a lot of theatrical plays, which one is your favorite and what part did you play?

Angus: “Topaze by Marcel Pagnol; It’s about the corruption of innocence.”

Fan club: “You won the Questors Award for your play ‘1905’. Could you give us an idea what the play is about?

Angus: “A sequel to Chekhov’s ‘Uncle Vanya’ set in the first Russian revolution.”

Fan club: “All the fans want to know where did you learn to ride a horse so well?

Fan club:What type of parts do you enjoy the most in movies?

Angus: “Characters who ask themselves: ‘Is there something worth dying for?'”

Fan club:Do you research the parts in a movie before accepting them or follow your instincts?

Angus: “Follow your instincts and try not to bump into the furniture.”

Fan club:Who are some of your favorite actors?

Fan club:What do you enjoy doing when you have time off from work?

Angus: “Getting another job, painting, loving friends, and trying very hard to understand my enemies. Not arguing with God.”

Fan club: Were you surprised when you found out about the fan club?

Fan club: Could you tell us what your impressions were when you were chosen to play the part of King Edward II in ‘Braveheart’?

Fan club: What was it like making the movie ‘Braveheart’?

Angus: “I was terrified. Always am.”

Fan club: Which scene in ‘Braveheart’ was your favorite?

Angus: “When young William drops a single tear at the graveside of his father. My hair stands on end every time.”

Fan club: What is something that you would most want your fans to know about you?

Angus: “The only demons in this world are in our own hearts, where all our battles much be fought.’ Gandhi.”

Fan club: All parents like to talk about their children’s accomplishments. What do your parents think about your work, now that things are really happening for you?

Angus: “They wish for me what all stable parents wish: An understanding of those inner conflicts which leaves us an ability to live at peace in a world quite mad.”

Fan club: Now that the movie ‘Braveheart’ was your launch pad into Hollywood, will you be staying there or going back to London to further your career?

Angus: “Stay in Los Angeles. The weather here suits the clothes I like to wear.”

Fan club: Is there anything you would like to say to your fans?

Angus: ‘The glory of God is to seek out. The glory of kings is to conceal.’ (I’m not sure of the exact words. Re: The Bible.)”

Fan club: Angus, on behalf of the fan club and the officers, we wish you the very best in your wonderful acting career and look forward to seeing you in your new movies. We thank you so much for this interview and will always support you in all that you do.

Angus: “Thank you, Bonnie, Kristine, and Karen. (The shortbread was, in short, delicious) X Angus Macfadyen”